Kelly Wilson loves that through her role as a diagnostic cardiac sonographer at ARH she has a chance to connect with her patients and make a meaningful difference in their health.

Kelly performs cardiac ultrasounds for patients who have been referred because they are experiencing symptoms such as shortness of breath, chest pain, heart murmurs or have a family history of heart issues. This is an important diagnostic tool the cardiac team uses to better understand what may be causing the symptoms and whether follow-up treatment or surgery is needed.

“The technology is always advancing with cardiac sonography so we’re able to image in greater details,” explained Kelly. “It’s so nice for the patient to be able to get all that information about their heart health non-invasively.” 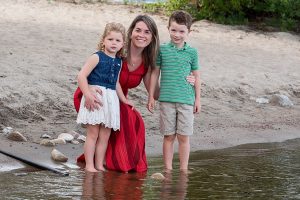 Kelly Wilson with her kids Chloe and Logan.

When Kelly was studying science at university, she volunteered at Kingston General Hospital and ended up in the ultrasound department.

“I thought it was really interesting and something I would enjoy,” she said. “That year, the general ultrasound program wasn’t running so I started to google different career options and found out that there was a dedicated cardiac ultrasound program.”

Kelly applied and got in.

“I intended to transfer into general ultrasound eventually, but I never left cardiac. I find it really fascinating and I’m always learning.”

A return to ARH

Kelly began her sonographer career in Ottawa and did not expect to find herself at ARH.

“My mom was a nurse at this hospital for 40 years as an RN in Emerg,” said Kelly, who started at ARH in 2012 and works part-time. “I never imagined I’d end up here but I’m so glad I did. We have a great cardiac team and I feel like we’re definitely making an impact in our patients’ lives, which you don’t always realize at the bigger facilities.”

Kelly also works in a casual role at the Ottawa Heart Institute.

ARH has allowed her to be close to her home in Kinburn where she lives with her husband and two young kids, Logan and Chloe.

“I often have a connection with my patients because I live locally and that helps put them at ease. People say it all the time that they’re so thankful to be  able to be come here and not have to travel into the city.”