Josh Chretien knew he wanted to work in healthcare and decided early on in grade nine to pursue nursing.

“Nursing felt like the right decision for me at the time,” reflected Josh, who grew up in Renfrew. “There are a lot of reasons to be a nurse and I don’t regret it.”

Josh began his nursing career at The Ottawa Hospital and after he moved back to his hometown, he didn’t want a long commute and landed a position at Arnprior Regional Health as a RN on the Inpatient Unit.

“It’s nice to get to know everyone’s name here and who you work with versus being a just a number at a larger hospital,” said Josh, who has been at ARH since 2010. 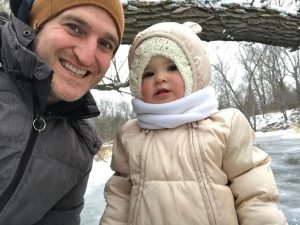 Josh Chretien and his daughter, Della.

Recently, Josh moved into the IPU’s care facilitator role on a temporary basis. The care facilitator role provides nursing leadership on the floor, focuses on patient flow, manages nursing staffing needs, carries out post-discharge phone calls to get feedback about a patient’s stay and addresses all incident reports and other concerns.

“It’s a lot of small fires that need to be put out quickly – every day,” explains Josh. “Whether it’s a sick call, a patient transfer, or a critically-ill patients, there’s always something urgent that needs to be dealt with.”

Josh sees it as a good fit because he likes to come into to work and accomplish tangible goals.

“I work with a great team and my focus is helping to create a positive atmosphere,” said Josh.

As he has moved into this new role, Josh values the support from Rosa Vigliotti, IPU Manager, and Laurie Hebert, Patient Flow Coordinator.

“Josh’s transition to this role has been very successful,” said Rosa. “He has taken on the role full-heartedly and has already made positive changes on the unit.”

Josh’s new role has also allowed him to work regular shifts during the week, which means more time with his family.