When Glenn Arthur retires from his beloved coordinator position at the Seniors Active Living Centre (SALC), this time it will stick.

Glenn’s first (very short-lived) retirement was from his career with the Town of Arnprior in Parks and Recreation.

“Because Parks and Rec was involved in the SALC, I worked on this project from day one collaborating with the team on the grant application,” explained Glenn.

Shortly after the SALC grant application was submitted, Glenn retired. But not for long.

“All of a sudden we got the news that the SALC had received the grant and the program needed a coordinator,” said Glenn. “I thought there’s something I could do in retirement – it’s not full time, there are no evening meetings, or work on the weekends.”

The SALC strikes a chord 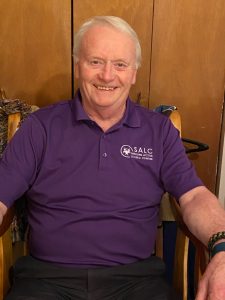 In fall 2018, Glenn helped open the SALC’s doors.  When asked how he would describe the past two and half years he responded: “Is there a bigger word than fantastic?”

The initial target was to grow the SALC to 300 members, which felt like a lofty goal in the early days. But it wasn’t. Before the COVID-19 pandemic, the SALC has ballooned to 650 members and opened satellite spaces in the community to accommodate the expansion of programs and people.

“Every day members were flocking,” reflected Glenn. “Seniors in our community were looking for things to do to keep them active.”

Glenn notes that the magic of the SALC is that it is social.

“Nobody walks through that door without a smile and when they walk out, it’s a bigger smile. It’s amazing to see.”

Like other group programs, the pandemic has impacted the SALC’s operations and membership. Glenn and the team expect that once the SALC can totally reopen, the membership will go up again.

When Glenn looks back on his time at the SALC, he is most proud that he was able to get it off the ground and be there to see it happen.

“All the years that I worked in Parks and Recreation, I always liked going to work. This has maybe been even better.”

Glenn retires on May 7, 2021 and he’s excited for what awaits him – his job jar, more time with his kids and grandkids and lots of golf.

“I’ve really enjoyed my time at the SALC and I’ll miss the people here,” reflected Glenn. “What I will probably end up doing is becoming a member and taking part in some of the activities.”