Arnprior Regional Health (ARH) provides care to a large geographic area that comprises Towns, rural communities and Census Tracts within a large urbanized core.  Previously we would have referred to this as our “catchment area”, and planned accordingly.  Nevertheless, as we are able to collect and analyze more detailed data, the concept of a catchment area is giving way to more localized neighbourhood planning.

In the following map, the communities that form the ARH neighbourhoods are highlighted in dark yellow.  While the included communities have a strong affiliation with ARH, it should be noted that the affinity of local residents to ARH decreases with increased distance, and proximity to other local hospitals.  To allow ARH to undertake meaningful health service planning, specific to the communities it serves, it is, therefore, important to develop planning data at a level of detail that not only encompasses its aggregate area, but also at a neighbourhood level. 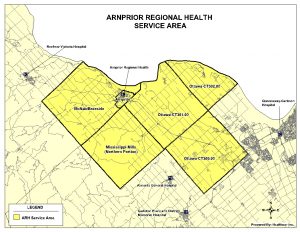 In addition to the planning undertaken by ARH, the Champlain Local Health Integration Network (LHIN) also has an obligation to complete various health services planning studies, which in some cases considers the neighbourhoods served by ARH.   In the most recent past, the LHIN has completed a number of studies for the entire Champlain LHIN.  For example, an Orthopedics plan, completed in 2016, provided an outline for the delivery of those services across the entire Champlain LHIN.   However, going forward, the LHIN, under the direction of the Ontario Ministry of Health and Long Term Care (MoHLTC), will utilize Sub-Regions to enable more detailed and geographically focused health system planning within the overall LHIN.

To that end, the Champlain LHIN suggests in their publication “Champlain Sub-Regions Population Health Profiles”:

“The establishment of five sub-regions by the Champlain LHIN will serve as the foundation for future health system improvement. They are areas that will serve as the focal point for local health system planning, as well as strengthening service integration and coordination in the region. Sub-regions will not create barriers to where people access care. They are, simply, a better way to plan and improve health services by increasing the focus on local strengths, needs, and challenges. A sub-region approach is expected to help improve health equity, patient experience, and overall quality.” 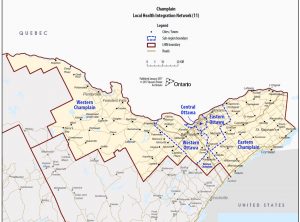 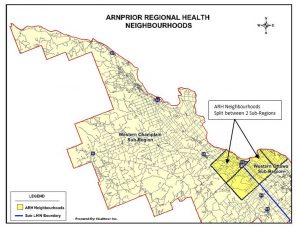 The Champlain LHIN recently published population health profiles for each of the 5 sub-regions http://www.champlainlhin.on.ca/GoalsandAchievements/OurStratPlan/SubRegions.aspx .  Using a small number of data points used to profile of seniors, we looked at the variation in results with the introduction of Sub-Regions.

Certainly, the use of Sub-Regions provides an improvement over a Champlain LHIN average; however, it fails to provide the necessary precision for local planning, as illustrated when comparing the ARH neighbourhood results to those in the overall Western Champlain sub-region.  We note as well that the ARH neighborhoods are split between two sub-regions, so that the results in any one sub-region do not necessarily fully reflect the communities that ARH serves.

However, rather than stop there, it is also important to go the next step and develop the planning information at an even more detailed neighbourhood level, to allow for localized planning within the communities we serve.  For example, within the Town of Arnprior, we have newer sub-divisions, which likely include a different demographic profile then the older areas within the Town.

Planning for health services is based on science, and science requires fact-based evidence upon which to plan, evaluate, and propose recommendations.

We are advocating for the use of Neighborhood data, in addition to the use of Sub-Region data, which in the case of Arnprior Regional Health includes communities from two sub-regions.  Moving to the use of neighborhood data will ensure we develop a level of detail required to make well informed decisions. 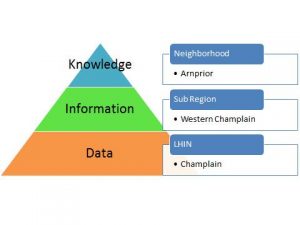 In summary, a key consideration in health service planning, is that the available information must be at a level of detail, to allow those who are both responsible and accountable for local planning and service delivery, an ability to use it.  At the sub-region level, as proposed, the Western Champlain area comprises multiple hospitals and health service providers (HSPs), none of which have primary responsibility for the overall planning and delivery of services in the aggregate area.  Rather, each HSP has a localized area to which it provides service within the sub-region.  Therefore, there is a need for the additional development of localized neighborhood information, at a level of detail that will allow ARH, and each of the individual HSPs, to undertake their own operational planning, and an ability to adjust the plan, as the needs of their communities change over time.  If done correctly, the detailed data will aggregate into the sub-regions, which in turn will aggregate to the overall LHIN.  This will allow each planning entity to work in concert with one another and align their efforts towards a common goal – maximizing the health of the Champlain LHIN, in an efficient and cost-effective manner.

Share any concerns or an experience you had while accessing our services, we welcome your feedback.
Provide Feedback