A year after Louise McCormick was diagnosed with dementia, she began attending Arnprior Regional Health’s Adult Day Program twice a week where she often enjoyed the variety of programming and welcoming staff.

“I knew she was safe, and it gave me a real break,” explained her husband, Terry McCormick.

Terry and Louise McCormick met 58 years ago in Timmins, Ontario at a town dance and eventually got married and raised a family in the northeastern Ontario community. When it was time to retire, they moved to their cottage on Abitibi Lake for 7 years filled with lots of fishing and hunting. 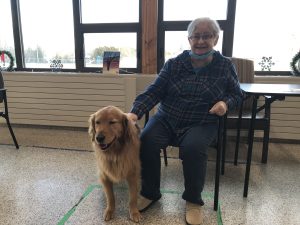 In 2009, Louise decided she had had enough of living year-round on the lake, so they moved to Arnprior where their son and two grandchildren lived. Before her dementia diagnosis, Louise had a serious accident when she was struck by a car as she crossed the street and was also diagnosed and treated for lung cancer. In between those hardships, Louise and Terry travelled extensively – Caribbean cruises, Europe, and bus tours to the United States.

Louise began at the Adult Day Program in the summer of 2020 and benefited from the in-home programming during the most recent COVID-19 lockdown. This past summer, Louise moved to the Grove Nursing Home for the specialized care and support.

“The Adult Day Program is run with such professionalism and empathy – I’m so grateful for their support,” said Terry.

As of October 1, the Adult Day Program is once again running out of the old Grove Nursing Home in its auditorium space. It is led by recreation therapists and provides a wide range of programming, which includes memory stimulation games, entertainment, cards, physical and social games, and fitness geared to the level of their individual ability.